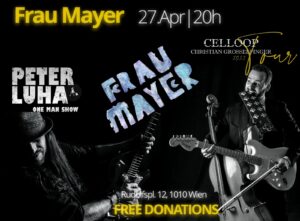 Christian Grosselfinger is an independent artist that after 10 years of persistence and determination enters his artistic maturity in “Looping” and “do-it-yourself” concept. After 5 International tours ( Brazil, United-Kingdom, Europe and Africa), 6 Cds and performances in prestigious locations (such as: UNESCO, SESC, and so on…) he adds his experience, versatility and eclecticism to his unique refined style. He has been part of several international orchestras and as soloist has shared headline events with big names (like: Zeca pagodinho, o Rapa, Coro da OSESP, João Bosco, Antonio Zambujo, Teresa Salguero (ex-Madredeus).
Creator of the “Celloop” concept, combining Violoncello and Looping, Chris now brings the powerful sounds of the keyboard and the virtuosity of the electric guitar on top of “Celloop” in order to expand even further his concept to became an ultimate One-Man-Band, bringing musical directions more broad and spicy: from the cinematography to Heavy-Metal, passing thought out Latin, Balkans and Fusion music.

A graduate in Composition from UNIRIO (Federal University of the State of Rio de Janeiro), endorser of REMIC Microphones in Denmark, Christian Grosselfinger, a Brazilian native, is reputed to be “one of the most promising Brazilian cellists”, by FNAC, Lisbon. After Brazil, he continued his studies of cello in several countries including Portugal, Germany and Austria. During this time, Christian has played in orchestras around the world, such as OSBJ in Rio de Janeiro, Volkshochschule in Karsruhe, Pro-Arte Orchester and Darstellende Kunst Orchester in Vienna, and the Academica da Metropolitana in Lisbon.
Composer of three CDs and Celloop’s concert: a single man’s orchestra, Christian also started a social project called Gratefulpath in 2014, touring 8 European countries, promoting concerts to raise funds for the eradication of poliomyelitis.

Peter Luha – Slovak multi-genre guitarist, singer, composer and producer
His unique virtuoso playing comes from a varied mix of guitar techniques like percussive beats, slap, tapping and fingerstyle. In his performances he masterfully combines singing, beatbox, playing on a special guitar, recorder and percussions and thanks to the looping technique he creates a One Man Band right in front of the audience.
Peter is official endorser of several prestigious brands – Ortega /DE/, Framus /DE/, TheBone /CH/, Dowina /SK/, Klema /SK/ guitars, Elixir /US/ strings, K&K Sound /US/ pickups.
Solo concerts in Europe, as well as in Mexico, US and India. As a special guest of the world-famous duo Igudesman & Joo he performes in Wiener Konzerthaus along with Wiener Symphoniker or Tonkustler Orchestra.
With Persona Grata band Peter performed at the biggest progrock festival of the millennium, Progressive Nation at Sea 2014 /Miami – Bahamas/, and in 2015 and 2019 they also performed together with the legend of the genre – Dream Theater.
His debut solo guitar album Viaje del Alma was nominated for The best instrumental album in 2012 in 12th Independent Music Awards and also awarded with the Harvest prize in 6th Tais Awards 2013.
With the visual artist Lucia Černeková they created an animated film project On The Road. Short films from the project participated in the official selections of more than 20 international film festivals around the world and received several awards.
Peter won 1st place at the International guitar competition Gitariáda 1999 organized by magazine Muzikus in Prague /CZ/ and won the TV singing contest Hviezdy na štart in TV Markíza /SK/ in 2002.
His popularity on social networks reaches more than 20,000 fans and 4 million views of his videos on Youtube and Facebook.

From the opening of @peterzanony exhibition. Thank

Looping improvisation at the opening of the exhibi

A short improvisation at the end my interview on r

A short improvisation as an introduction to my int