Flight of the Bumblebee (for Solo and Backing Guitar)

Flight of the Bumblebee for guitar: PDFs of the sheet music (notation and tablature) in Sibelius, the full score in GuitarPro5 file, plus MIDI file and audio track from my solo guitar album Viaje del Alma.

“Orchestral interlude written by Nikolai Rimsky-Korsakov for his opera The Tale of Tsar Saltan, composed in 1899–1900.
Its composition is intended to musically evoke the seemingly chaotic and rapidly changing flying pattern of a bumblebee. Despite the piece’s being a rather incidental part of the opera, it is today one of the more familiar classical works because of its frequent use in popular culture.” – Wiki

I arranged “Flight of the Bumblebee” for solo and backing guitar and you can find it on my solo guitar album Viaje del Alma, or in different versions on my youtube channel.


Download contains PDFs of the sheet music (notation and tablature) in Sibelius, the full score in GuitarPro5 file, plus MIDI file and audio track from my solo guitar album Viaje del Alma. 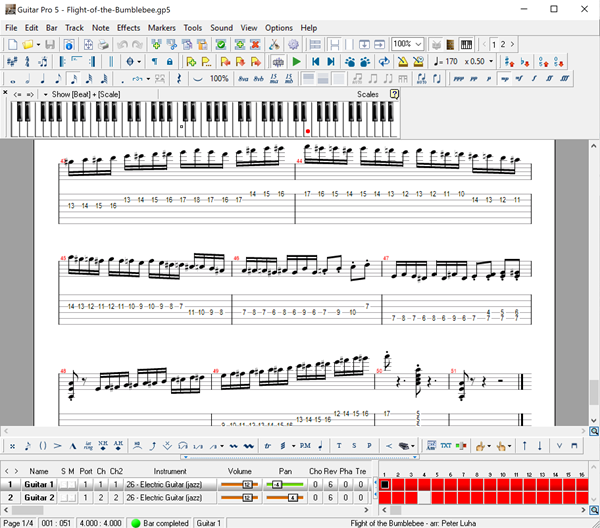 The first video from my acoustic solo guitar conce